Join 103 other subscribers
Follow Words from Paradise on WordPress.com 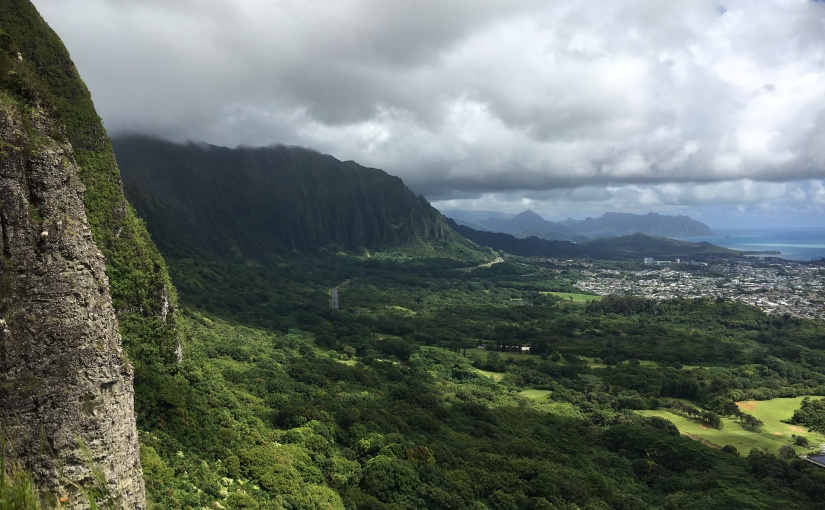 This morning on my walk, I saw a man riding his bicycle with a small dog running after him. I’ve seen them before, getting their morning exercise together. The man rides all over the Manoa Park and Rec area, and his doggy friend chases him. It’s great fun to watch.

About ten minutes later, I saw them coming toward me on a walking path–the man on his bicycle and his dog about a hundred feet behind, still running. As Doggy passed me, he made eye contact and slowed a bit; but I wasn’t the one he was after, and he sped up to catch his friend.

I got to thinking, why does this dog run all over the park chasing his owner? There are plenty of other things to chase–birds, other bicycles, people, best of all, other dogs (lots of them; even lady dogs). But he runs as if on an invisible leash, attached to the man on the bicycle.

Clearly, the reason he chases this bicycle is because his friend is riding it. No doubt he has bonded with the man since puppyhood. Now, he has a heart and eyes for no other. Maybe at first, there were treats for following. Now, he just follows for the joy of following. At the end of the chase, I’m sure there are joyful embraces, puppy kisses, and loving words.

You might guess where I am going with this. God longs for us to chase after Him, to long for Him, to have eyes for no other, to follow him on an invisible leash of love.

Speaking to His people in Bible times, God said, “I remember the devotion of your youth, how as a bride you loved me and followed me through the desert. . .” Jeremiah 2:2.

What would it take to become a God-follower, a God-chaser, as it were?

First, simply seeing what is so good about Him, what is worth chasing. That is why He has revealed Himself in the Bible, and also so often in our lives–so we can get to know Him. To know Him is to love Him. It is as simple as that. Reading the Scriptures regularly can help us form that invisible attachment.

Truth is, the chase is not just ours to make. God has been chasing us. He chased His people (and others) all through the pages of the Old Testament, calling them, longing for them:  “All day long I have held out my hands to an obstinate people, who walk in ways not good, pursuing their own imaginations. . .” Isaiah 65:2

Then in the greatest chase of all time, He sent Jesus, the Good Shepherd, to seek and save us. He lived among us, showing us the heart of God for broken people like us. Then He made the ultimate Sacrifice by dying for our sins, to win our hearts and set us free and restore us.

So the reality is, we who chase God are those who have seen how passionately He has chased after us. His pursuit has won our hearts.

As a famous God-chaser once wrote: “I press on to take hold of that for which Christ Jesus took hold of me.  I do not consider myself yet to have taken hold of it. But one thing I do: Forgetting what is behind and straining toward what is ahead, I press on toward the goal to win the prize for which God has called me heavenward in Christ Jesus.” Philippians 3:12-14. The prize is spending forever with our Friend, Jesus.

If we are not chasing after God, it might be because we are distracted by other things in the park. We are tempted to chase all kinds of things: our profession or trade can be very satisfying; and rightly so. Relationships; God made us for relationships. Amusement and recreation. Nothing wrong with having fun and enjoying beauty. God made us for that too. But are we chasing these things to the exclusion of chasing Him?

Francis Thompson wrote about it in his famous poem, The Hound of Heaven:  “I fled Him, down the nights and down the days; I fled Him, down the arches of the years; I fled Him, down the labyrinthine ways of my own mind; and in the midst of tears I hid from Him, and under running laughter. Up vistaed hopes I sped; and shot, precipitated, adown Titanic glooms of chasmed fears, from those strong Feet that followed, followed after. But with unhurrying chase, and unperturbèd pace, deliberate speed, majestic instancy, they beat—and a Voice beat more instant than the Feet. . .”

Have you let Him catch you? I have. His love is better than life. It is the ultimate love because He is so amazing, so wonderful. But I still chase after him. I am not perfect. There is still so much I want to see and know about Him. So much to learn.

But the Man on the Bike, longs for us to chase ultimately after Him, above all, in all, and through all we do.

Will you become a God-chaser with me?