Join 103 other followers
Follow Words from Paradise on WordPress.com 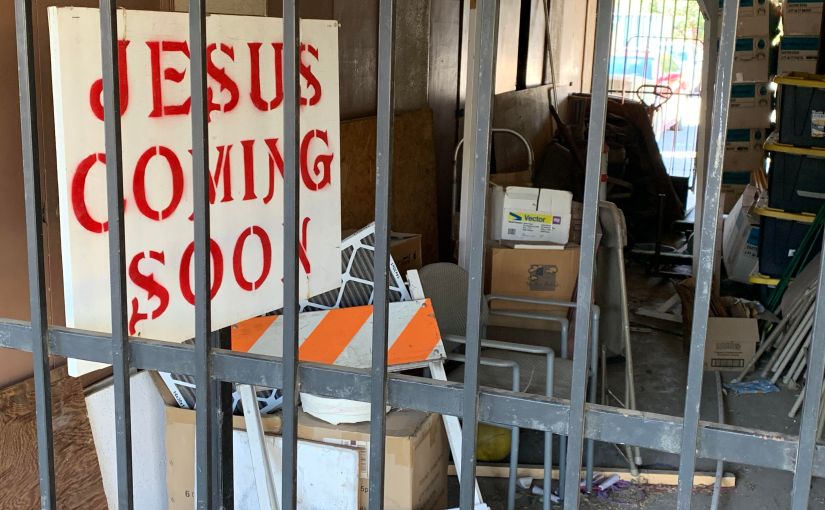 Many people are asking if the COVID-19 Pandemic is a sign of the End. Seeing how it has affected the whole world, bringing rapid infection and death, shutting down economies, affecting much of the planet, prompting government intervention, raising concerns about civil liberties–all these and more, has stirred up the recurring question, “It this a sign?”

Christians believe Jesus predicted signs that would alert us to His Second Coming. But I am guessing people of other faiths, or no particular faith, are wondering too. No religion or philosophy has a corner on this question.

Since I am writing as a Christian, I am going to answer from that perspective.

Jesus did describe many signs and events in His teaching about the destruction of Jerusalem and the end of the world. His explanation is found in Matthew 24, Mark 13, and Luke 21, repeated in different ways by three New Testament writers. One of these signs was “pestilences,” or pandemics.

“There will be great earthquakes, famines and pestilences in various places, and fearful events and great signs from heaven.”

The COVID-19 certainly qualifies as a great pandemic when we think of how many have died and the disruption caused to our world and global economy. Was Jesus referring to this, specifically?

Jesus’ teaching about signs was given in response to a question asked by His twelve close disciples. Their question and Jesus’ answer gives us an crucial clue to understanding “signs.” So, let’s join their dialogue:

“Jesus left the temple and was walking away when his disciples came up to him to call his attention to its buildings. ‘Do you see all these things?’ he asked. ‘Truly I tell you, not one stone here will be left on another; every one will be thrown down.'” (Matthew 24:1-2 NIV)

Jesus had just finished His strongest warning ever to the religious leadership in Jerusalem. It is sometimes called “The Seven Woes.” He excoriated them for their hypocrisy and double standards. But He ended with an impassioned, loving appeal”

“O Jerusalem, Jerusalem, you who kill the prophets and stone those sent to you, how often I have longed to gather your children together, as a hen gathers her chicks under her wings, but you were not willing. Look, your house is left to you desolate. . .”

What an appeal! It was only days now until Jesus would be arrested, tried, and crucified. Israel’s opportunity to accept her Messiah was rapidly coming to a crisis.

The disciples heard Jesus words about the Temple being left desolate, and it created an uneasy fear. Was Jesus’ pronouncing judgment against their beloved Temple? Would it really be destroyed. That’s when they asked their question.

“As Jesus was sitting on the Mount of Olives (they had hiked up from the temple to the Mount), the disciples came to him privately. ‘Tell us,’ they said, ‘when will this happen, and what will be the sign of your coming and of the end of the age?'”

Jesus had just said something shocking–that all the buildings on the Temple Mount were going to be destroyed. Not one stone left on top of another. The Romans had spent years building this beautiful religious complex for the Jews. It was their pride and joy, and to them, evidence of God’s blessing. The stones of the temple mount were massive, some as large as a school bus. It was unimaginable it would be destroyed.

However, Jesus was predicting this would definitely happen, and the prophet Daniel had also prophesied it hundreds of years earlier (Daniel 9:26). Jesus cited this prediction by Daniel in Matthew 24:15.

Two Questions in One

Jesus’ followers had asked, “When will this happen, AND what will be the sign of your coming and of the end of the age?”

People in Jesus’ day expected the “End of the age” to take place in their time. They did not understand that the Messiah would come, die, rise from the dead, and return to heaven, followed by His Second Coming many centuries later.

Jesus told them that before the destruction of Jerusalem (by Titus in 70 A.D.), many things would take place: false Christ’s would appear, wars, rumors of wars, famines, earthquakes, and pestilences in various places. (Dr. Luke is the only one to mention pestilences, in Luke 21:11. His trained ear picked up Jesus’ mention of disease pandemics.) All these things happened just like Jesus predicted.

However, Jesus’ point to them was that when they saw these things, they were not to interpret them as signs of His near Second Advent. Here are His words: “Such things must happen, but the end is still to come. . .All these things are the beginning of birth pains.” Matthew 24:6, 8.

“The end is still far away,” Jesus was telling them. “These troubles will be like the beginning of a long birthing process, taking place over many centuries, until I finally come back. The earth will be writhing in labor pains, so to speak, until I come.”

Many years later, Paul wrote, “The whole creation has been groaning as in the pains of childbirth right up to the present time.” (Romans 8:22)

To summarize so far, Jesus divided His teaching about “signs” into two parts: events before the destruction of Jerusalem: and, signs that would show His Second Coming was getting closer.

Jerusalem was destroyed in 70 A.D., precisely as Daniel and Jesus predicted. It was a terrible time for the Jewish people. Thousands upon thousands lost their lives. But Jesus had prepared His followers to understand that not even this terrible event, as earth-shaking as it was for Christ’s followers, was the End. There was more history to come, and more signposts.

Taken by itself the COVID-19 pandemic is not necessarily a sign of Jesus’ immediate (or close) return. Jesus told His followers that these things would happen, but the end was not yet (Matthew 24:6). There have been many pandemics down through history. For a fascinating list, read here.

By using the metaphor of the birthing process Jesus was teaching there would be an intensification of sign events that this world needs the deliverance only God can give: false Messiahs, wars, natural disasters etc. When we think of the wars in the 20th and 21st Centuries, the invention of nuclear bombs, the increasing power of storms, the weird messianic movements, we have certainly seen that.

In that sense, a world-wide pandemic of this magnitude could be a sign of Jesus’ soon coming, but there are many more things to consider.

Jesus’ teaching about the End of Time and His Second Advent is much bigger than one event, as serious as it might be. His teaching about this is like an artist’s painting. It takes many colors, many details to make a portrait complete.

When He predicted events leading to His Coming, Jesus pointed to sign events in the natural world, the geopolitical area, the economy, the religious world, and more. It is a coming together of many forces and occurrences.

Something like the COVID-19 Pandemic could trigger other things leading to final signs and events, but we won’t know for sure until it happens. It might only be another pandemic like many we have had, or it could morph into something more.

Jesus did present clear teaching about some specific things that would happen before He returns. But even more importantly, He explained what our focus should be and how we can be ready for that and live as we wait for His return. I will write about these in future blogs.

In the meantime, I invite you to read the three chapters mentioned above, Matthew 24, Mark 13, and Luke 21, and reflect on what we have seen there. Next time, I will discuss what all these things mean for us, living closer to Jesus’ return.